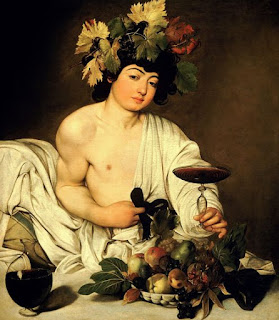 Such a view is strictly speaking called hedonism.  It comes from the Greek word, hedone, which is the word for pleasure.

If we could show that life resulted without God (that is without a ground beyond ourselves which establishes morals), hedonism might be a reasonable view. But, it fails for several reasons.

First, how did we get here?  One astrophysicist, Sir Fred Hoyle, said that Evolution was the most unbelievable miracle of all time.  He saw that the mathematical odds for evolution were incredible, even for an astrophysicist like himself.  He did, not, though reject evolution, but he moved from theism (there is an omnipotent Creator God) to panentheism (there is a spirit or designer within the world directing its evolution or progress).  This is usually a Hindu view, but is also present throughout the whole of western philosophy.

Panentheism has a fatal flaw: "God" has no guarantee of "winning" or achieving his or her outcomes.  "God" must work with matter, and humans and other creatures to try to achieve his or her goals.  Such a god is not worthy of worship.  Such a god also carries out his or her project at our expense.  He or she gains from our efforts, but we pass back into unconsciousness.

Some now are willing to postulate that aliens "seeded" life on earth (for instance, as in the film, Jupiter Ascending).  This is no better.  Where did the aliens come from?  How did they come to exist?  If they are created, then they had a creator.  This is an example of an ad infinitum argument.  There cannot be an endless regression of causes.  At some point there has to be an uncaused cause (a theistic God).

The issue of hedonism is also self-destructive.  First, it's difficult to define "pleasure".  Do you mean unbridled pleasure?  Surely this can't be true, because after your first several undergraduate drinking sprees, you learn that drunkenness is not pleasant, at least the hangover isn't.  It's also in the long run self destructive.  So, you moderate your behavior.  If you moderate your behavior, you admit that there is a rule beyond mere pleasure, and it must be a rational one.  No one can be a pure hedonist seeking immediate gratification.

There is also a problem of what is pleasure.  For some torturing others is pleasant.  If you're into sadism or masochism, that might sound good, but what if you are not and you are being tortured?  (The Marquis de Sade is the person from whom we get the term sadism.)

Also there are arguments that it might be preferable to suffer pain and even death for some higher cause.  Any country which institutes conscription into the army in time of war uses such an argument.  The greater good requires some individuals sacrifice themselves for the preservation of the greatest number.

It seems easy to define pleasure, but it is not so easy.  If we want firm definitions, we must have a rule or a standard, upon which to base our definition or judgment.  For Christians that standard is what God, the Creator says, and who He is in Himself.

For instance, God says that monogamy is his intent.  We can ignore it to pursue "pleasure" (whether heterosexual - adultery or sex outside of marriage - used to be called fornication - or homosexual).  However, sexually transmitted diseases show that we suffer consequences when we ignore the rules God gives.

Even if we use a naturalistic explanation, defining pleasure is not easy.  Some pleasures are immediate: taking LSD gives a person a "high", but it has long term detrimental effects (at least, addiction, if not overdose).  Some pleasures might not have immediate negative consequences, but they have long term ones.  Nicotine has been called "the perfect drug".  It lifts you up when you're down, and calms you down when you're anxious.  The problem is that long term smoking leads to emphysema or lung cancer.

So we're back to the same problem: What is pleasure? and Should it be governed or controlled?  It must be controlled, then pleasure is not the final arbiter of behavior, but rather reason.  Whether arguments from reason or physical explanations are given, there must be a rule or ground of reason and a design in creation, which wanton indulgence in pleasure breaks, resulting in consequences.

For further interaction with hedonism, one could see Carl FH Henry, Christian Ethics, for an explanation of how hedonism is self-defeating.  The Baker Encyclopedia of Christian Apologetics also has an article about hedonism.

Posted by Phil Gottschalk at 6:09 AM