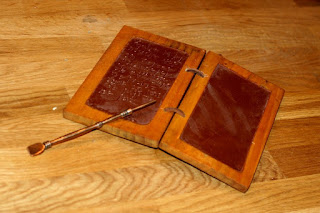 In ancient Greece teachers and students used wooden boards coated with wax as “chalkboards”. (If a computer specialist can design a program that exists only in hyper space and call it a Black Board, I guess we can be allowed to call the wax tablet a “chalkboard”.)  They used a stylus (not that thing you poke at your iPhone with, but a metal poker or pointed wooden stick) to make letters or drawings in the wax.  When the person finished writing and wished to erase the writing or drawing, they heated a piece of metal and smoothed out the wax.

As the wax got older, it was stiffer and would neither take new images or smooth over again.  At a certain point the wax had to be scraped off and replaced with newer supple wax.

If a student dropped his wax tablet on the ground, and it got covered with grit and dirt, it was impossible to clean. It would not take any new images or if it did, one could not see them.  So, again the wax would have to be scraped off and new soft, supple wax had to be put on the tablet.

Socrates says this is why it’s easier for young people to learn than older people.  Older people have “hardened wax.”  One other factor is that people engage in bad habits: drinking too much, smoking, lying, cheating, etc.  If one consistently does morally bad things, one scatters grit and dirt on one’s “wax”.  The result is that a morally bad person or a person who abuses drink and substances is unable to learn.


We may not be able to keep the “wax” from hardening due to age, but we can certainly avoid the “dung” which is often thrown onto the “wax” by our poor moral choices.

SOCRATES: I would have you imagine, then, that there exists in the mind of man a block of wax, which is of different sizes in different men; harder, moister, and having more or less of purity in one than another, and in some of an intermediate quality.

SOCRATES: Let us say that this tablet is a gift of Memory, the mother of the Muses; and that when we wish to remember anything which we have seen, or heard, or thought in our own minds, we hold the wax to the perceptions and thoughts, and in that material receive the impression of them as from the seal of a ring; and that we remember and know what is imprinted as long as the image lasts; but when the image is effaced, or cannot be taken, then we forget and do not know.”

SOCRATES: But when the heart of any one is shaggy—a quality which the all-wise poet commends, or muddy and of impure wax, or very soft, or very hard, then there is a corresponding defect in the mind—the soft are good at learning, but apt to forget; and the hard are the reverse; the shaggy and rugged and gritty, or those who have an admixture of earth or dung in their composition, have the impressions indistinct, as also the hard, for there is no depth in them; and the soft too are indistinct, for their impressions are easily confused and effaced. Yet greater is the indistinctness when they are all jostled together in a little soul, which has no room. These are the natures which have false opinion; for when they see or hear or think of anything, they are slow in assigning the right objects to the right impressions—in their stupidity they confuse them, and are apt to see and hear and think amiss—and such men are said to be deceived in their knowledge of objects, and ignorant.