Jesus' grave clothes: Does it matter? 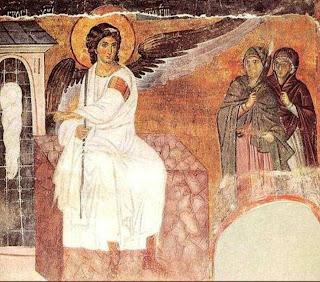 A popular piece is circulating on Facebook as it has circulated on the Internet since at least 2006. This popular explanation of the “napkin” that lay under Jesus’ head when he was in the grave is provocative. It is a very nice story for Christians, if it is true.

A friend shared this piece with me. Basically it says that when Jesus rose he folded the “napkin” that had been over or under or around his head.

I add here the original version from David Bivin, a biblical researcher in Israel (see his view below)

He (the master, Jesus) is coming back! Hallelujah!

There are several responses. My original response was to summarize John RW Stott’s explanation in his book Basic Christianity.

1. John Stott’s explanation in Basic Christianity
2nd ed. Grand Rapids, MI: Eerdmans, 1971, 52-54
If you read it in my previous comments about the “napkin,” skip to the next section.

The grave clothes were wrappings. For Jesus to leave them or the body to be stolen without cutting them or taking them would have been impossible. They were left looking like a chrysalis after a butterfly emerges or like a balloon inside had burst and the wrappings dropped on the stone shelf uncut. It was proof that the body was not stolen or that he got up with them somehow still on. The cloth which covered the face was more like a turban wrapping around the head from the chin up. It was placed as if it have been lifted straight up (which would have been impossible to clear the chin) and set at the head of the wrappings. See John Stott Basic Christianity 52-54

For a second view I summarize here the view of another great Anglican Bible scholar, Dr. Leon Morris who was head of Ridley Theological College in Melbourne, Australia.

Of the grave clothes Morris says that the idea that the wrappings lying as if the body had been miraculously transported through the wrappings leaving them flattened [Stott’s interpretation] is not contrary to the text, but isn’t explicitly supported by it.  He also says of the cloth on Jesus’ head that it was akin to our handkerchief, but then notes in a footnote that it was a “jaw band”, a cloth wrapped around the jaw and head to keep the jaw shut. 735, ftnt 18 [which would seem to support Stott’s “turban” interpretation of the cloth].

His text
John 20:4–5. They set out together: Both were running, but the other disciple outran Peter and reached the tomb first. On arrival, the other disciple bent over and looked in at the strips of linen lying there but did not go in. Jesus’ body had been wrapped in strips of linen by Joseph of Arimathea and Nicodemus (19:40) and placed in the tomb. When the other disciple looked in, all he could see was the strips of linen, but no body. For some reason he did not enter the tomb for closer inspection.
6–7. Peter showed no such reticence: Then Simon Peter, who was behind him, arrived and went into the tomb. He saw the strips of linen lying there, as well as the burial cloth that had been around Jesus’ head. The cloth was folded up by itself, separate from the linen. No mention is made of the burial cloth in the account of the burial (19:38–41), but it was common to use one for the face of the deceased (11:44). The main point is that the linen strips were just lying there with no body, and the burial cloth was folded by itself, no longer covering the face of Jesus’ body. Clearly, the body of Jesus had not been stolen by his enemies, nor removed by his friends. In either case, the linen strips and the burial cloth would not have been removed at the tomb.

It has been suggested, but cannot be proved, that Jesus’ resurrected body simply passed through the linen strips, leaving them still in the shape of his body, though somewhat collapsed. [So says John Stott in Basic Christianity] Perhaps attentive readers of John are meant to note the difference between Lazarus’ restoration to life and Jesus’ resurrection. Lazarus emerged from the tomb still ‘wrapped with strips of linen, and a cloth around his face’ and he had to be released by others (11:44), whereas in the case of Jesus the linen strips and burial cloth were simply left behind when he rose from the dead.

8–9. Following Peter’s example, Finally the other disciple, who had reached the tomb first, also went inside. When he had a closer look at the linen strips and the facial burial cloth just lying there without any trace of Jesus’ body, He saw and believed. This must mean that he believed that Jesus had been raised from the dead, even though, the evangelist adds in parenthesis, They still did not understand from Scripture that Jesus had to rise from the dead. It was to take some time before even ‘the other disciple’ understood that Scripture foreshadowed the resurrection of Christ. According to Luke, the risen Jesus himself opened the eyes of his disciples to understand the Scriptures, i.e. what was written about him ‘in the Law of Moses, the Prophets and the Psalms’ (Luke 24:25–27, 44–46).

It is important to note the emphasis John and other NT writers place upon the importance of the empty tomb. For them the resurrection of Jesus was certainly not just ‘spiritual’ survival after death; it involved a real resurrection of the body.
Another commentary I like for its brevity and evangelical commitment is the Life Application New Testament Commentary.

Their text
John 20:3-5 Though John’s youthful legs carried him more swiftly to the grave, once he was there he stooped and looked in, but he waited for Peter’s arrival before entering the cave. Resurrection would not have been their first thought. None of the possible natural explanations for the missing body were of any comfort. If Jesus’ body had been stolen or moved by the religious leaders, the disciples would have reason to worry about their own fate.

20:6-7 Close examination revealed that the linen wrappings had been left—perhaps as if Jesus had passed right through them. [As John Stott asserts in Basic Christianity.] The cloth that had covered Jesus’ head was rolled up separately from the other wrappings that had enveloped Jesus’ body. A grave robber couldn’t possibly have made off with Jesus’ body and left the linens as if they were still shaped around it. The neatness and order indicated that there was not a hasty removal of Jesus’ body. Rather, Jesus arose and left the wrappings lying there, empty [as Stott says].

20:8-9 When John saw the empty tomb and the empty graveclothes, he instantly believed that Jesus must have risen from the dead. The text stresses the importance here of John “seeing and believing” to affirm the eyewitness account of an apostle. Most believers would not have this opportunity; they would have to base their faith on what these witnesses reported. John explains that until then they hadn’t realized that the Scriptures said he would rise from the dead. Though Jesus had told them, it took the experience for them to understand. Some of the Scriptures that foretold this included Psa 16:10 and Isa 53:11.

20:10 Perplexed, John and Peter left and went home. They “believed” in something miraculous; that is, they did not fear that Jesus’ body had been stolen, as Mary had, but they did not know for sure what they believed or what they should do next. So they just went home. Later, they joined with the other disciples behind locked doors (see Joh 20:19).
I referred to David Bivin above in his blog Jerusalem Perspectives he addressed this supposition, popular tale.

David Bivin. “Christ’s Linen Napkin (John 20:7): Is it significant that the napkin that had been around Jesus’ head when he was buried was found in the empty tomb folded?” 2006OCT07 Blog
https://www.jerusalemperspective.com/3878/
Accessed 15 April 2020

Phil’s summary:
In 2006 he called the story of the master/ slave and napkin a hoax. He notes that Jews washed their hands before meals, not afterwards. They would not have wiped their hands on anything.  They did not have “napkins” of any sort.

The head covering was a known Latin object for covering the head of a corpse (Latin sudarium, Greek σουδαριον).  It is used in other places in the NT with Lazarus, most notably, where it had to be removed by others (John 11:44) and Paul’s napkins being taken to heal people (Acts 19:12).
He reckons it sounds nice and people flip it along on the internet.

David Bivin’s bio
Studied in Israel at the Hebrew University as a postgraduate from 1963-69
https://www.jerusalemperspective.com/author/david-bivin/
Accessed 15 April 2020

6. Phil’s final comments about the folding of the head cloth (or clothes, wrappings)

I have never heard this explanation of folding the head cloth or wrappings as having anything to do with Jesus showing he would come again or masters and slaves or servants in New Testament times.  It makes no sense to me since Jesus appeared to Mary and then the 12 shortly after this event.  Also when he ascended angels told the twelve that Jesus would return just as they saw him go. (Acts 1:11)
I don’t see the need for any “secret” sign of folding the “napkin” to show that he would soon return.  He appeared almost immediately after the event to Mary Magdalene and the then 12 (John 20:11-29)  and he appeared over 40 days “with many convincing proofs.” (Acts 1:2,3)
I still like Stott’s explanation despite criticism by others.

Aside from this the whole episode shows that Jesus actually physically rose from the dead!  This puts the lie to all attempts to deny the actual, physical resurrection of Jesus and any attempt to spiritualize it or to demythologize it.

Jesus rose from the dead!
Jesus is Risen! He is Risen Indeed!

Because he lives, we too shall live! “I am the Resurrection and the Life; all who live and believe in me, even though he die, yet shall he live!” (John 11:25)

Posted by Phil Gottschalk at 3:11 AM