"A rolling stone gathers no moss."

I love moss.  I guess it’s that I’m from western Pennsylvania and there was a lot of moss in the woods near my home and at campgrounds and state parks.

I learned to identify all the forms of moss we had in western PA when I was a kid.  I was a Boy Scout and I earned the Botany merit badge by learning to identify various types of plants and trees and moss.  As a Boy Scout, for instance, we were taught that sphagnum moss would make a nice mattress if pushed into a sack.  Sphagnum moss is unique in that it has a more elongated structure. 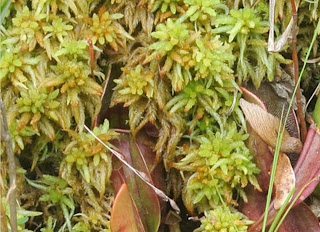 But I like all forms of moss.  The air here in the Netherlands is very humid and it rains very, very frequently.  We aren’t having real winter these days: no snow, no real low temperatures, only frost on the car window and the rooves once and a while.

Nothing else will really grow in our backyard.  The bicycle shed shelters it and that means there is little sunlight.  There is also a tall tree which we like for shade and beauty, but it does shade the yard and grass won’t grow.

We had a beautiful boxwood bush which nothing except a blight could kill, which it did two years ago.  We have a laurel bush now and a couple bridal wreath bushes.  There’s a lot of ivy and an overgrown pine.  There are also some rose bushes which Linda planted and one left from previous tenants.

But the part of our backyard I like the best is the moss and the dead leaves.  Our yard in the Netherlands is starting to look like the woods I love.

Linda knew that I loved the woods, even if I never want to camp in a tent sleeping on the ground again.  She found me a lovely little campground with self-catering apartments beside the Ambleve river in southern Belgium in the Ardennes mountains near where the Battle of the Bulge took place.

The view from the top of the hill above the camp is beautiful with other hill tops in the distance and farm houses and barns, cows and a ski slope.  I always enjoy seeing the same statues and monuments, the one of Jesus with outstretched hands receiving WWI fallen soldiers and the WWII monument from the 82nd US Airborne in Wannee.

I like being able to walk along the path which has recently been renewed along the Ambleve river from Domaine Long Pre to Stavelot, the larger town in that area. There was once a thriving monastery there which housed hundreds of monks. Now it is a war museum and government offices.  The quaint houses and shops of Stavelot are endearing.


We almost always go to the same restaurants. I almost always order the same things, especially Ardennes trout with creme sauce, mushroom and bacon, Flemish beef stew cooked in beer sauce and rabbit butt cooked in plum sauce.  French fries are not French.  They were invented by the Belgians and no meal in Belgium is possible without “friets.” 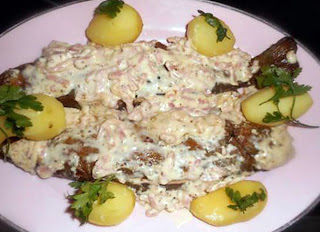 I haven’t had it with potatoes, but the fish and sauce look right!

But I think I especially like seeing all the moss as I walk up the hill under the pine stand.  The plain, old moss and the sphagnum moss.

Now we have even had moss growing in front of our house on the pavement.  I like the moss and the wild violets which grow there.

In the early part of our missionary career we moved constantly.  We never stayed even two calendar years in one place, until we moved to Leuven, to Belgium.  We were five school years there.

Now we have been in the Netherlands almost twenty years, twenty this August.  There is a lot of lovely moss.