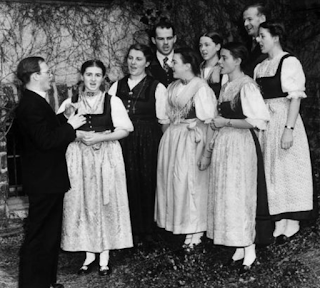 I was watching a film and was thinking about how sometimes former military officers were forced to fight for an army or navy they did not support.  It led me to think about Baron Georg von Trapp, the father in the “Sound of Music.”  He had been a decorated Austrian Navy officer in WWI.

The von Trapps were real people.  He refused to serve in the Nazi Navy. The von Trapps fled Austria having lost all their money and their home.  They carried only what they could.  They arrived in the US with nothing but one bag each.

Later after they had managed to earn some money, they moved from Philadelphia to a farm in Stowe, Vermont.  Vermont reminded them of Austria. The ramshackle house on their farm collapsed and they had to build a new house.  However, the locals thought these foreigners were “fifth columnists”, spies, and the locals wouldn’t help them.

Right now we have a similar problem.  Refugees who have fled their countries and only want a quiet home, a modest home, an honest living, are seen as terrorists, when they are in fact the victims of that terror.

Though the von Trapps hated the Nazis and had given up their home and country, they were “different” and “dangerous.” Yet their sons served in the US Army during WWII.

I have written elsewhere about how my father as a boy in elementary school was beaten up for being a “German” (Gottschalk) during WWII when his father, John Irwin, was a Civilian Builder (CeeBee) in Pearl Harbor, Hawaii helping to rebuild the US Navy fleet.

Fear is stupid and mean.  We should care for refugees, not fear them and characture all refugees as terrorists. Propaganda is also stupid.  It led to innocent Japanese Americans being interned in prison camps in the US during WWII, again the reason being fear of “fifth columnists” or sympathizers.

Here’s a part of “the Story of the Trapp Family Singers” where Maria von Trapp speaks of how their neighbors thought that they, the von Trapps, were spies, fifth columnists.

“Try as we might, we couldn’t get any more men to help us [in our rebuilding efforts]. All the young men were gone, it seemed, and the older ones were already busy. The true reason, however, we would learn much later. The people in this remote mountain valley had read stories in the newspapers of fifth columnists coming as tourists into Holland or Denmark, and starting to build something, anything; a tennis court, for instance. Then at the moment of invasion these innocent-looking buildings were equipped with guns and these innocent-looking tourists were Hitler’s helpers. There had come into this Stowe valley a group of foreigners, dressed quaintly, talking queerly, and they had started to build. Of course they said it was a house, but who knew whether they wouldn’t one day open fire and start shooting down the valley. We were always glad and grateful that we didn’t hear that story at the time when it was still believed. At that time it would have hurt us bitterly. Years later when we learned it from a laughing neighbor, we tried to picture what we could possibly have shot at, and still don’t know to this day.” Maria Augusta Trapp, The Story of the Trapp Family Singers. Phila., PA: JB Lippincott, 1949, 242.

After the von Tapps gave a benefit concert to pay for fixing of the roof of the school house in town, the townspeople’s view of them changed.  Maria wrote:

“While this most cruel of all wars was inflicting deeper and deeper wounds upon humanity, a group of people in a forlorn corner of the mountains had discovered how to create that good will to which is promised peace on earth: by giving and not counting; each one giving all he has; his time, his skill, his effort, leaving behind a wake of that feeling about which there is so much talked and written, but so little experienced: the feeling of true brotherhood.” Trapp, The Story, 243-44

Posted by Phil Gottschalk at 8:35 AM