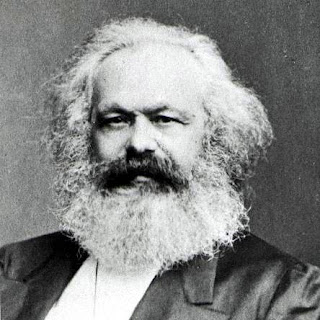 The third of the Masters of Suspicion is Karl Marx.  Marx is not taken seriously at all these days, except where people are poor.  Perhaps we feel that he had a right to criticize 19th century industrial Britain or 19th century Imperial Russia.  However, he was also criticizing industrial society in general, and expected Germany to be the place where the first Workers’ revolution would occur.

Marx’ suspicion concerned money, stuff, things, capital.  Marx believed that the ruling powers, which held ownership of capital, used their influence and power to keep the workers in near slavery.  The main insight is that it’s not about morality or religion or good will; it’s all about money.

We say that we believe in the Christian virtue of charity, but we hoard things, building additions onto our houses to hold our “just in case” supplies or discount purchases.  We have garages for four cars.  We “save” money in the stock market or banks hoping to stave off economic reverse.  This may sound all too close to home, but it has been less than 175 yeas since some in the US argued that God had intended some to be slaves and serve others.  The ones intended to be slaves happened to be black and the ones to rule white.  Even “good” Bible exegesis of the day upheld this view. See RL Dabney’s “Defense of Virginia.” (http://www.portagepub.com/dl/causouth/dabney.pdf)

Posted by Phil Gottschalk at 8:41 AM