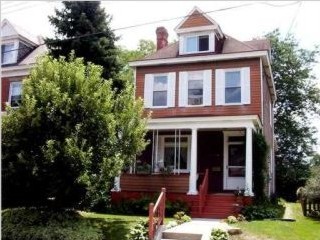 For me or my sister or brother to attend school in the North Hills School District was to be known as Bertha's grandson or granddaughter or Bernice's nephew or niece.  They were sometimes big shoes to fill.  Aunt Bernice eventually completed her doctorate in Art Education at the University of Pittsburgh and worked for 20 years for the PA Dept. of Education making sure that school districts had adequate art curriculum.

The elementary school I attended was Quail Elementary.  My first grade teacher was Mrs. Pfeiffer.  She was my grandmother's contemporary and friend.  She was the sort who still read a Bible passage and said a prayer before class every morning.  The one Jehovah's Witness spent the few minutes in the hall.  Mrs. Peiffer was old school.  So was grandma.  Grandma didn't ken with the new reading system.  Phonics has served her well for over 40 years.

When I was in the fifth grade some executive in the school district decided that they needed to shift some of us to another school due to high student - teacher ratios.  We were the end of the Baby Boomers and numbers were high.

So we were bused to Seville Elementary, a new school which had just opened.  It meant we lost our friends.  Though we made new friends, it was tough to lose the old ones.  My fifth grade teacher was a friend of my Aunt Bernice's.  I'm sure she was extra kind to me as a result.

When time for high school came we all "went up" to the new Intermediate School and the High School on the hill.  (Everything in Pittsburgh is on a hill; hence North Hills High School and North Hills School District.)  We attended ninth and tenth grades in the Intermediate School (now the High School).  My most vivid memory of that building actually came from twelfth grade when I ran the second fastest mile in the school history to that point while in gym class.

We attended eleventh and twelfth grade in the building of what is now the Junior High School.  My most vivid memories of the High School were playing tuba in the North Hills High School Symphony and Marching Bands.  While I had a brief career on the swim team, band was all consuming.  Mr. Warren Mercer, decorated several times with the American Band Master Award, produced top notch bands.  We spent many hours in the parking lot below the now Junior High School drilling formations.  My Aunt Marilyn, who had played clarinet in the West View High School Band, used to love to sit on my grandmother's porch on Norwich Avenue in West View and listen to us practice.

Being in Ross Township, but on the border of Bellevue meant that it was easier to be involved in local Scout troops, both Cub Scout and Boy Scout, in Bellevue.  I attended at first Cub Scout Pack 166 and then Boy Scout Pack 166 at the Bellevue UP Church on Lincoln Avenue.  When our Scout Master died suddenly I shifted to Pack 135, which met at Assumption RC Church.  Several of us were from Ross Township, but local packs were easier to attend.  We could walk there.

We also had the right to a Bellevue Pool Pass due to sale of the land from Ross Twp to Bellevue to build the pool.  I was on the Bellevue Pool Summer Swim Team for several seasons and it was a nice way to cool down on hot summers.

Lincoln Avenue in Bellevue was our "stomping ground".  When I was a kid there was an Isley's Sweet William restaurant and the ever popular Luigi's Pizzeria.  The old Bellevue movie theater was still there until I left for college in 1977.  The old theater, before it was "remodeled" to have two small viewing halls, was an amazing plush seat, dramatic turn of the century theater similar to the Warner Theater on Fifth Avenue downtown.  The high ceilings, beautiful curtains and gold painted balconies are long gone.  I bought a bicycle at Murphy's on lay away, which I paid for with money I earned delivering the North Hills News Record.

It was great to have the 16C bus (now 13) which went out to West View.  I could ride the bus from the top of our street at East Orchard and North Fremont (the stop is still there) to my grandmother's street, Norwich Avenue (where Schellhaus Funeral Home is) in West View.  I also used to ride the 16C to St. Luke Evangelical Lutheran Church, where we went to church and where I was catechized and confirmed, and met Linda Stuckrath, now my wife.  The 13 now stops at West Park Mall, which used to be West View Park. West View Park was an amusement park known for the Dips and Racing Whippet, rollercosters, and the Dance Land, my father had earlier frequented.

Bellevue also had several bus lines, which went into downtown Pittsburgh.  There are still three: 13, 16, 19.  We could go down to the Carnegie Library in the Allegheny Center Commons or visit stores and theaters downtown.  With a transfer we could go out to Oakland to the Carnegie Museum of Natural History or the Sarah Scaife Art Gallery.